"The Imprinted Time" - A dedication evening to Andrei Tarkovsky 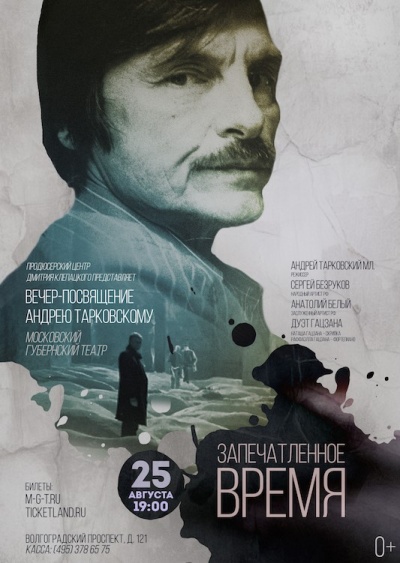 «Art affirms all that is best in man – hope, faith, love, beauty, prayer... What dreams of and what he hopes for...»
Andrei Tarkovsky

Rich in ethical content, the concert will include the recitations of passages from Andrei Arsenyevich Tarkovsky’s works devoted to the esthetics and theory of filmmaking, as performed by Anatoly Beliy; of the poems of the director’s father, Arseny Tarkovsky, read by Sergey Bezrukov; and the direсtor’s favorite works by classical and contemporary composers, performed by Duo Gazzana (Italy). Their appearances on the stage will go parallel to an exclusive video sequence of the family’s photo-and video archives, recordings of interviews and fragments from Andrei Tarkovsky’s films.

Sergey Bezrukov, actor, People’s Artist of the RF: «Andrei Tarkovsky’s name is well-known all over the world. What I like is his unhurriedness, his long, detailed takes – in our time of fast clipmaking, nobody films like that – and it’s too bad. Because this contemplation adds volume and deepness, and, thus, carries the narrative beyond the framework of everyday life, and we get a feeling that we see not a little corner of the world but a whole Universe, where every tiny nuance has a lot of sense. All but in every of Tarkovsky’s films we hear poems of his father, Arseny Tarkovsky, and I guess that the source of the son’s imagery lies in these very poems. The Tarkovskys’ cinema and poetry were so interweaved that one hardly can imagine Andrei Tarkovsky’s films without those verses. I’m happy that the evening in memory of the great film director will be held on the stage of Moscow Guberniya Theatre, and I’ll have a great pleasure to read Arseny Tarkovsky’s verses.»

Anatoly Beliy, actor, Honored Artist of the RF: «To me, Andrei Tarkovsky is an absolute of creation, a man who totally devoted his life to art, and even subordinated it to the laws of art.  I think he was not only creating – he lived only by the categories of cinema. He was the embodiment of true Artist. It’s a great honor for me to read at that function in his memory his notes, and to make known the thoughts and images of that great man.»

The director of the dedication evening is the film director’s son, Andrei Tarkovsky Jr., who specially came home from Italy for his father’s memorial night.

Andrei Tarkovsky Jr., film director: «My father’s creative work goes far beyond filmmaking. It’s hard to overestimate the influence his art had, and is still having, on different people all over the world, and not only professional people. Painters, poets, writers, filmmakers, musicians find inspiration and new creative paths thanks to Andrei Tarkovsky’s films, even people, far removed from the creative process,
when they come in contact with his exceptional poetic outlook (of course, if that outlook is in consonance with their own) experience an emotional and spiritual revelation, discovering the artist’s amazing and mysterious inner world that can profoundly influence their lives. I’ve never heard a filmgoer say about other directors’ films that “this film has changed my life”. And I hear it quite often about Tarkovsky’s films. So, our dedication evening is not just an effort to pay tribute to the memory of the great film director, but to get a little closer to his inner world, to the artist’s “laboratory”, where his great images were born and where his world outlook was formed, thanks to the passages from his books and speeches and the most abundant photo and video archives (from the materials of Tarkovsky Archive in Florence,
where, practically, all of Tarkovsky’s documents are gathered), as well as the works of Bach and contemporary composers, whose creations were consonant with the imagery world of Tarkovsky.».

Duo Gazzana wishes to pay a tribute to Andrei Tarkovsky’s creative works for the unique spiritual values they’ve shared with the world. Therefore, the duo will present a concert, dedicated to the film director, which will include his favorite musical pieces and some that would have certainly touched his heart. As Andrei Tarkovsky had lent a great cultural significance to cinema - the youngest among the arts, by the way - by including in his films the images and music of the most prominent painters and composers throughout the history of world culture, so, in the concert’s program, the music of composers of the past will sound harmonious with the works of contemporary authors. Thus, Bach’s music, so much loved by Tarkovsky and often played in his films, alternates with modern compositions, which, spiritually, are akin to Tarkovsky’s creativity.

Dmitry Klepatski, producer: «Tarkovsky’s films have a special place in Soviet cinema. His name still represents the Soviet and Russian cinema abroad. His films are loved and adored all over the world. This year, we’ll mark 30 years since he died, and we would like to invite everybody who appreciates Tarkovsky’s work to pay him a tribute».

***
Andrei Tarkovsky (April 4, 1932 — December 29, 1986) — Russian Soviet film director and screenwriter. From 1980, worked in Western Europe. People’s Artist of the RSFSR, one of the 20th-century most prominent film directors, whose works had a great influence on the country’s and the world’s development of cinema.


***
Andrei Tarkovsky Jr., son of Andrei Arsenyevich Tarkovsky, a documentary film director. Resides in Florence, Italy. Graduated from Florence Art College and, in 2006, finished the Roma Film Academy in Cinecittà. Andrei Junior made several documentaries, such as «Bastignano» (short film), Rome, 2006, top prize at the festival  «Сorti di Sabaudia», 2006, Italy; «Andrei Tarkovsky: A Remembrance» - «Atlanta», Moscow, 1996.; the documentary «Manfredi. Un ritratto sommesso» (Manfredi. A Modest Portrait) – Rome, 2005
Andrei Tarkovsky Jr. is also President of the Andrei Tarkovsky International Institute based in Florence and Paris. As the sole heir to the copyright and moral rights on his father’s artistic heritage, he is popularizing Andrei Tarkovsky’s works and archives. Andrei Tarkovsky International Institute puts out books and DVDs, organizes exhibitions, retrospectives, concerts and symposia, devoted to the film director, in Europe and all over the world.


***
Sergey Bezrukov – Russian actor. People’s Artist of the RF (2008). Laureate of the State Prize of the RF (1997). Born October 18, 1973 in Moscow. Graduated from Moscow Art Theatre’s School-Studio. From 1993 to 2013 worked at that theatre under the direction of Oleg Tabakov. Appeared in TV series – “The Brigade”, “Precinct”, “Master and Margarita”, “Yesenin”; as well as in films – “Azazel”, “The Admiral”, “Strict Regime Holidays”, “Vysotsky. Thanks for Being Alive”, “The Match”, “Moms”, and others. Played lead parts in theatrical productions – “Psycho”, “Confessions of Adventurer Felix Krull”, “Even a Wise Man Stumbles”, “Amadeus”, “ADVENTURES, drawn up from N.V. Gogol’s poem ‘Dead Souls’”, “The Crazy Day, or The Marriage of Figaro”, “Pushkin”, “Hooligan. A Confession”, “Cyrano de Berjerac”, “The Sleep of Reason”, “The Little Prince”, and others. Since January 2014, Artistic Director of Moscow Guberniya Drama Theatre. From  2016 г.  – General Producer of Sergey Bezrukov Film Company.


***
Anatoly Beliy – Russian theatre and film actor. Honored Artist of the Russian Federation (2006).Three-time winner of the theatrical award “Seagull”, winner of the “Moscovski Komsomolets” and Oleg Tabakov Fund Prize.  Born in the Ukrainian settlement of Bratslav on August 1, 1972. In 1991 entered the Shchepkin Theatre School (master class of N.N. Afonin), which he graduated from in 1995.
From 1998 — actor at Stanislavsky Drama Theatre; since 2003 — actor at the Moscow Art Theatre named after A.P. Chekhov. Today in his repertoire are the lead roles: Маster («Master and Margarita»), Layevsky («The Duel»), Rayski («The Precipice»), Katurian («The Pillowman»). Appeared in films – “The Brothers Karamazov”, “Paragraph 78”, “The Metro”, “The Valley of Roses”, “Chagall-Malevich”, “The Heirs”, “Orlova and Aleksandrov”, and many others. Actively participates in the recital programs and festivals -  Performance in the style of story-telling “The Little Prince”, together with Marina Sosnina, an artist in sand animation, and the Moscow Virtuosi Orchestra. Poetic performance “Triptych” based on verses by O. Mandelstam,
B. Pasternak, I. Brodsky and others. Author and artistic director of the cultural and educational project “FilmPoetry".

***
Duo Gazzana has been formed by two Gazzana sisters - Natascia (violin) and Raffaella (piano). Of Italian birth, culture, taste and education, the duo also received their musical schooling internationally – from such famous maestros as Bruno Canini, Ruggiero Ricci, Yehudi Menuhin, Corrado Romano, Piero Farulli, Pierre Amoyal. The duo had the honor to perform before His Highness Prince of Wales, an heir to England’s throne, during his official visit to Italy to commemorate a centenary of William Walton, an English composer. The duo was named “an ambassador of the city of Florence” and “a government’s guest” of Japan during the celebrations of international ties between Italy and “the Land of the Rising Sun”. Recently, the duo debuted in New York at "Robert Miller Gallery" within Manhattan’s "Look and Listen Festival", and in Tokyo at Hakuju Hall. The sisters’ repertoire is abundant – from the classics to contemporary composers. Duo Gazzana is noted for their special interest in searching for new musical works, even if they’re little known and different in their cultural and historical content. Contemporary composers dedicated their works to the duo, among them Valentin Silvestrov, Huu Phuc Dang, Fabio Maffei, Tonu Korvits. Duo Gazzana was the first to present Italian chamber music to be recorded by ECM Records. The latest Duo Gazzana’s disk with the music of Poulenc, Walton, Dallapiccola, Silvestrov, Schnittke was named by the "Sunday Times" as one the ten best recordings of 2014 .

***
Dmitry Klepatski – Russian actor and producer. In 2010, graduated from VGIK and, then, in 2012,
from the EAVE European producers workshop. He is the producer of several full-length features («The Find», «Last Summer in Chulimsk», «That’s Not Me», and others). These films have been awarded prizes at the Russian and world’s film festivals, such as “Kinotavr” in Sochi, Black Nights Festival in Tallinn,
“Onflreur” in France, and others. Dmitry is the General Director of Klepatski Productions. The company specializes in film co-productions with European partners.